I have abandoned you for a very long time, and I’m really sorry for that. I must start writing this blog again, it was fun the past two years doing so. However, I have been really busy lately with my first AS exams and issue five of Woodnote (Which is highly exciting). But now those are over for a while, I promise that I will be getting back in touch with you guys!
I have recorded a vlog, which I’ll upload shortly. See, I was reading my blogs and I figured that you don’t know much about me personally. I tell you what I’m up to or what I’ve done, but on a strange level, you have no idea what I’m actually like or who I actually am! So hopefully this vlog (which will be uploaded very sooon!) Will tell you a little bit more about me rather than what I’ve been up to.

In the meanwhile I have a question I want to pose to you. See I have been doodling recently in my frees at sixth form and any spare time I can grab. And I would love to throw a comic together. I have no idea what it would be called, but my character would be based around me and I guess I’d just turn them into a pretty cool superhero.

So looking into this, I asked myself what does a good super hero need? I mean, I don’t want the character based on me to have underpants over her lycra fitting suit. She needs to look established and respectable and also pretty cool.
Then I came to realise that everyone cool has a cape. Frodo, Wonder Woman, Batman, I mean, even Robin gets his own cape! So there I decided I need a cape to make a sufficient comic character.

I know I declared earlier that I want to be a superhero, and yeah, it would be pretty awesome, but in my storyline that I’ve been plotting for a while, I don’t really do anything superhero-ish.

So here is my question, should I start up this comic? The pictures may not be all that good, but the storyline is quite decent. Or should I just write it as a story with a few pictures here and there?

In my mind I think I might just throw some pictures together, post them up here and see where it takes me … The setting is kinda space-y with a charming romance going on. But there are twists and dark corners every now and again.

Expect to see something starting here on this blog. You guys are the first to know about it and I’ll see what happens! 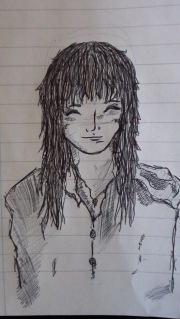 Here’s one of my sketches, I would obviously have to sort out that outfit, and I am in need of a name ^^ x